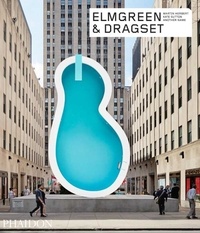 The artist duo ELMGREEN & DRAGSET have played a significant role in redefining the way in which art is presented and experienced today. They have challenged the generic format of the white cube in various ways and they have transformed museum halls and gallery spaces into wholly different environments, such as a public swimming pool, a subway station, hospital wards, welfare offices, or domestic settings. Their series of works named Powerless Structures - a term inspired by Foucaults theories on power - investigates how the dynamics of both institutional and urban structures might be less stable than we imagine and can therefore be subject to constant negotiation. Working in multiple disciplines such as sculpture, installation art and performance, Elmgreen & Dragsets ongoing spatial interventions decontextualize the familiar with a subversive absurdity. Some examples include siting a forever-closed Prada boutique in the midst of the Texan desert, positioning a statue of a boy riding his rocking horse on the Fourth Plinth in Trafalgar Square in London, installing an upright, 10-metre-tall sculpture shaped like an empty swimming pool and titling it Van Goghs Ear at New Yorks Rockefeller Center, or covering the Place Vendôme in Paris with one hundred small red starfish cast in bronze. Based in Berlin, Michael Elmgreen (b. 1961, Denmark) and Ingar Dragset (b. 1969, Norway) have worked together since the mid-1990s. They have held numerous institutional exhibitions at venues around the world such as the Whitechapel Gallery, London (2018)